As part of Intel's 2030 Corporate Responsibility Strategy and Goals, the computer-chip giant has made clear its ambition to achieve net positive water use by 2030.

New goals and Net-zero water use

Computer chip giant Intel is moving forwards on its goal to achieve net positive water use by 2030.

Ahead of its new 2030 target, Intel launched its new RISE strategy (Responsible, Inclusive, and Sustainable world Enabled through technology and our collective actions).

From a sustainability standpoint, the company has three main objectives: achieving net-positive water use, 100 per cent renewable power and zero total waste to landfill.

“Over the past decade, Intel has conserved 44 billion gallons of water.”

To achieve its goal of net-positive water use by 2030, Intel has set out the following three targets:

How thirsty is Intel? 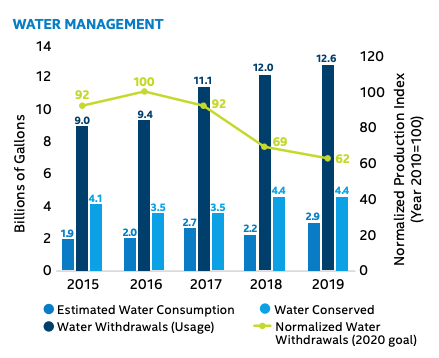 Intel operates in one of the most water-intensive industries on the planet: semiconductor fabrication requires significant water use.

During the period of 2015-2019 Intel increased the amount of water withdrawn each year, defined as "total gallons of incoming fresh (potable) water used".

Currently, the company is on track to restore 100 per cent of the water it uses by 2025. Around one billion gallons of water has been restored through 21 projects that Intel said, "are expected to restore more than 1.6 billion” per year.

It also achieved a 38 per cent reduction in its water use, with the company targeting to reduce its water use on a per unit basis below 2010 levels by 2020.

Currently, Intel has restored one billion gallons of water through 21 projects that Intel say, "are expected to restore more than 1.6 billion.”

Interestingly, Intel published its climate change, water security and supply chain engagement figures via the Carbon Disclosure Project (CDP). It achieved a B, B and A score respectively in these three areas.

In 2020, Intel scored an "A" for supply chain engagement rating, gaining a top three per cent placement with its 2019 rating.

Data centres and the company's onsite water reclaim operations have been addressed. The company’s latest data centres use recycled water and advanced cooling techniques, such as evaporative cooling towers, that eliminate the need for expensive chilled water and computer-room air conditioning units.

“The company has linked a portion of the executive and employee compensation to corporate responsibility factors.”

These changes cut the company's operating expenses associated with cooling from 49 per cent to six per cent of its total operating cost.

In 2019, Intel's Dalian fabrication facility in China completed a project that enabled it to reclaim water for use in the cooling towers, reusing approximately 145 million gallons of water per year.

The company also showcased three water reuse and restoration projects in Arizona and California, and in Bangalore in India. Intel also released the results of their latest smart building in Israel, the LEED Platinum building, which uses 75 per cent less water than the average office building.