For many in the water sector, the news of AI-start-up Synauta being sold may not have come as a surprise.

Founded by seasoned desalination expert Mike Dixon, a sale was always on the cards for the ambitious Aussie leader. After all, he had solid experience in the team that scaled Californian membrane company NanoH2O, eventually sold to South Korean company, LG.

Yet, what did come as a surprise was how early the growing industrial water treatment giant, Gradiant, bought the company.

Speaking to Aquatech Online, Dixon said: “We see Gradiant as a rocket ship, and we wanted to join the journey."

Synauta, which set out to build the “AI Netflix model for desalination", was four years into its journey, with a team of 10, before being acquired. One industry source close to the deal estimated the sale was for around the $6-8 million range.

It raises the question of whether the company would have been sold for more, with VC-injected capital and further growth? The sale must have come earlier than expected?

“Much, much earlier,” responds Dixon. “As a water entrepreneur, you must think about a 10-year horizon. For us, we've been extremely lucky.

"We planned to get venture capital funding and double the team size next year. But the deal from Gradiant was much palatable than a venture capital deal, and we were excited about joining the team.”

Scooping a distinction in the recent GWI Awards, Gradiant was credited with bringing more solutions to the “industrial sector’s difficult water treatment challenges” in the last 10 years than any other company.

And if anyone’s counting, the company has 450 employees across twelve countries and 250 patents. It could be said solving challenges has been baked into the company’s genesis, origin story and roots.

Speaking to Aquatech Online, co-founder & COO Prakash Govindan said: "It’s [solving problems] in our DNA. Anurag [Bajpayee, co-founder & CEO] and I are very solution-minded, so we were never going to build a company that sells a widget. It was about solving customer problems."

Founded upon technologies invented at MIT (Massachusetts Institute of Technology), the spark for the company started in 2011 when Govindan finished his PhD, and an oil company asked if they had a solution to treat its wastewater.

“MIT is one of the few places you can do a PhD where your work can be more applied than elsewhere,” added the COO.

“We built our prototype in response to the request, and we were in the oil field very quickly. After graduating, Anurag and I raised a couple of million dollars and put a pilot system out in mid-Texas.” 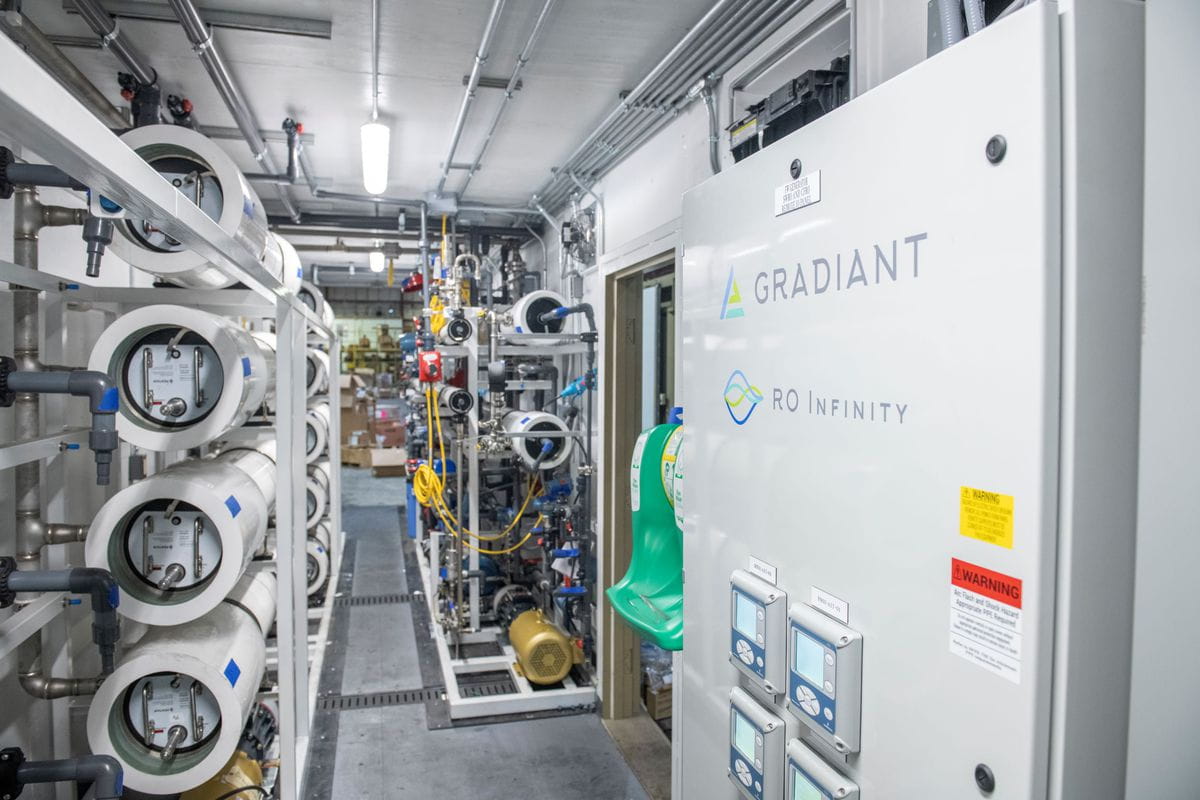 After hiring a team to fine-tune its pre-treatment systems, resulting in the selective chemical extraction (SCE) solution, the company jumped into build-own-operate (BOO) projects in Midland, Texas. Govindan describes this region and market as a "gold rush" in 2012/13, where “everybody was rushing to unconventional oil and gas”.

After proving themselves with an $8 million end-to-end produced water desalination plant, the company went on to build 25 build-own-operate plants.
Today, the company is providing its solutions in the pharmaceutical, mining, food & beverage and, more recently, the semiconductor market, which he describes as a "huge market".

This year alone, Gradiant expects to generate $30-35 million in revenue from the semiconductor market, which is looking to water reuse as local supplies become scarcer.

The European industrial water market is the next target for the company, as it looks to "dial the oil field application down in the US, as it's too cyclical for a company that is scaling growth like Gradiant”.

GWI recently labelled Gradiant as the water sector’s first “half unicorn” based on securing a $100 million investment, giving the company a valuation of half a billion dollars. To date, the company has raised over $200 million.

Govindan jokes about the unicorn reference, asking "which half," but it raises the question of does it have what it takes to build the other half into a billion dollar value company?

“Gradiant is an innovation rocket ship - we are a growth engine,” says Govindan confidently. “We have great prospects, a great team, money in the bank and the ability to acquire companies. This is not from the view of growing top and bottom line, but rather combined synergies."

The company is confident about the industry leaders it's bringing together, boasting it has the "best technical team in water".

This includes many former Osmoflo, Oasys Water and Desalitech executives, including Rick Stover and Hiep Le, which Mike describes as "rock stars in a list that goes on.”

In terms of the recent acquisition of Synauta, the companies are exploring such “synergies.”

“We’re learning about each other’s technologies and are now working to build the right things together,” adds Dixon, who will remain in place as the CEO of Synauta. "We're excited about building a platform that spreads across entire treatment systems and the digital platform together.”

The AI solution will be integrated into the company’s ‘SmartOps’ digital platform.

“We’re looking to the Synauta solution to make it a more integrated digital solution for our clients,” says Govindan.

“Gradiant owns and operates plants. Some plants have installed our ROI (RO Infinity) and CFRO (counterflow reverse osmosis) membrane solutions, and some have our CGE (Carrier Gas Extraction) thermal systems. Mike and his team are already building the algorithms for all these components. We’ll train these over a period of time.”

While the early sale of Synauta to Gradiant may have come as a surprise to many in the sector, few can doubt this is good news, proving an opportunity to combine digital and industrial solutions. Watch this space.