Like any technology or component in contact with water, reverse osmosis (RO) membranes in desalination plants age over time.

To help maintain water quality and production continuity, there is an opportunity to predict when the membranes will foul and subsequently must be cleaned.

The onset of the worldwide Covid-19 pandemic wasn’t the best timing for a new partnership – it meant the collaboration had to be carried out remotely.

However, in eight weeks, the teams created a prototype system to predict membrane ageing and anticipate maintenance, as detailed in the video from AWS below:

The pilot plant was the 200,000 m3/day Sur desalination plant, owned and operated by the Sharqiyah Desalination Company (SDC) in Sur, Oman.

"The mission of the co-developing team is to support customers at an early stage of the project, with hands-on implementation using AWS services," said Stephane Paccaud, EMEA Prototyping Engagement manager from AWS.

Drinking water expect Claire Ventresque added: “It was challenging not to be together in the same room. But the result of the project is a testament to the dedication of the team.”

To start, three years of data from the SUR desalination plant was pre-processed and fed into the Amazon DeepAR algorithm, using its SageMaker service.

This was to learn from previous patterns and predict the future evolution of fouling indicators, such as differential pressure or the conductivity of the water, which enabled the team to anticipate maintenance “weeks or days in advance”.

“We cleaned this data and prepared it for machine learning processing,” added Paccaud.

Veolia reported that the solution led to a reduction in the membrane downtime and prevented excessive energy and chemical consumption.

At the SUR facility, SDC processes over 200,000 m3/day of seawater from its unique beach-well catchment – said to be the largest in the world.

Over 97 per cent of the mechanical energy is recovered and up to 40 per cent more energy saved than a conventional reverse osmosis plant, according to Veolia.

According to Aditya Akella, operations manager for Veolia Middle East, the ability to plan short-term preventative maintenance now means that the plant can optimise water storage capacity and minimise the "negative impact of an unavoidable shutdown". 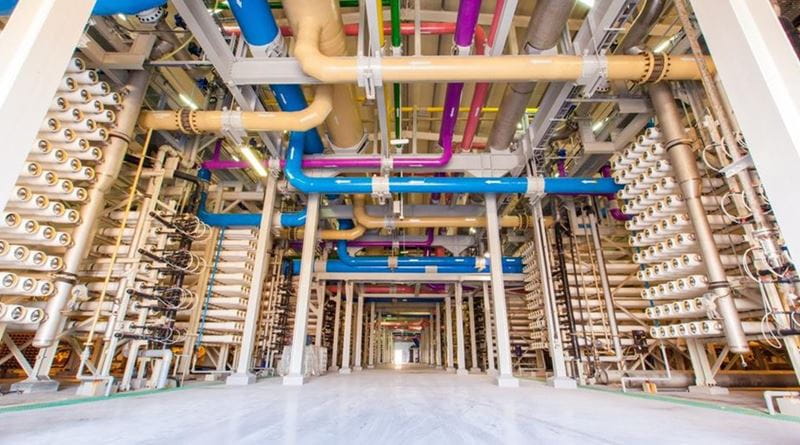 The prototype solution is now in beta testing, with user acceptance tests currently being carried out and plans to roll out starting in the Middle East.

Veolia Water France had previously worked with AWS and its public cloud, which allowed it to set up virtual data centres and operate its systems without any constraints.

“The idea to harness data and AI has been a game-changer,” said Aude Giard, chief digital officer at Veolia Water Technologies. “We have created a substantial edge in the value we can deliver to our customers, particularly improving the operational resilience of water plants.”