Malena Galmarini is president of water utility AySA, serving 14 million people in Bueno Aires. She discusses the need for innovation in the public sector

Malena Galmarini is not into nicknames or slogans. Instead, she says she is more focused on solving problems and finding “solutions to transform lives”.

As the president of one of the top five largest water utilities in the world, Agua y Saneamientos Argentinos (AySA), she certainly had to find solutions quickly when she started.

Joining as the first female president of AySA in 2019, the organisation - serving 14 million people in the Argentina capital city, Bueno Aires - was suffering from hundreds of "paralysed" infrastructure works.

Since then, Galmarini has worked tirelessly under the premise that access to water and sanitation remains a basic right.

“With a great budgetary effort from the National Government and a great commitment from AySA workers, we were able to reactivate the paralysed projects in a very short time,” she says.

Today, AySA has over 320 works in progress, all framed under the organisation’s Master Plan.

Speaking to Aquatech Online, she added: “In addition, we were able to give a greater boost to large-scale infrastructure works such as the Riachuelo and Agua Sur systems, unique for their design and dimension in Latin America.

“We will not stop until all Argentine women and men have equal conditions and access to these essential services.”

Despite Galmarini’s optimism and drive, she remains aware of the challenges ahead, including reaching financial sustainability.

The water utility recently launched “Enlace AySA”, an innovation hub which Galmarini says was “created from the need to prepare for a world that is transforming at an unprecedented speed”.

“Enlace AySA was born as an idea when we assumed the commitment to bring water and sanitation to every corner of our area of responsibility, and we have been able to achieve it in record time,” she adds.

Enlace launched in partnership with the Latin American Association of Water and Sanitation, better known as ALOAS.

The president admits that “innovation hubs have become a global trend” and that “AySA does not pretend to be the first”.

However, she says it is part of an objective to bring Latin American, Hispanic and Portuguese-speaking innovation to the world.

“With more than two billion people in the world suffering from a shortage of this essential element for life, the best thing that could happen to us as a species is that spaces for innovation related to water proliferate in every corner of the planet.”

When asked how important it is for a public water utility to be considered innovative, Galmarini says the priority is to be recognised “as a company that brought water and sewage services to every house in Argentina, while generating export value for Argentina, Latin America and the entire world”.

The Enlace innovation hub will be kickstarted in 2020 with a hackathon called “Water Challenges 2030”.

A total of 30 multidisciplinary teams will take part across four areas, including Drinking Water, Sanitation, Users and Strategic Resource and Organisation.

Galmarini believes that technologies are going to play an increasingly leading role, as we enter the Fourth Industrial Revolution. She says we cannot deny that a profound change is taking place in society.

“We want to approach old problems with a new look, incorporating perspectives that were unthinkable until a few years ago”

We want to approach old problems with a new look, incorporating perspectives that were unthinkable until a few years ago," she says, listing tools such as artificial intelligence (AI), robotics, behavioural economics and blockchain.

“These are tools and disciplines that have given many benefits to other sectors and have much to contribute to water. Something similar occurs with social transformations such as the need to promote diversity and human rights around water.”

Responses to the Covid-19 pandemic

Like all nations, Argentina has faced severe challenges with the Covid-19 pandemic. A recent article from the Bueno Aires Times reported that total confirmed cases in the country had passed 750,000.

Commenting on the situation, Galmarini adds: “The lockdown posed a challenge in terms of organising processes and work. But we were able to guarantee the provision of water and sanitation services and we did not stop any work; quite the opposite. 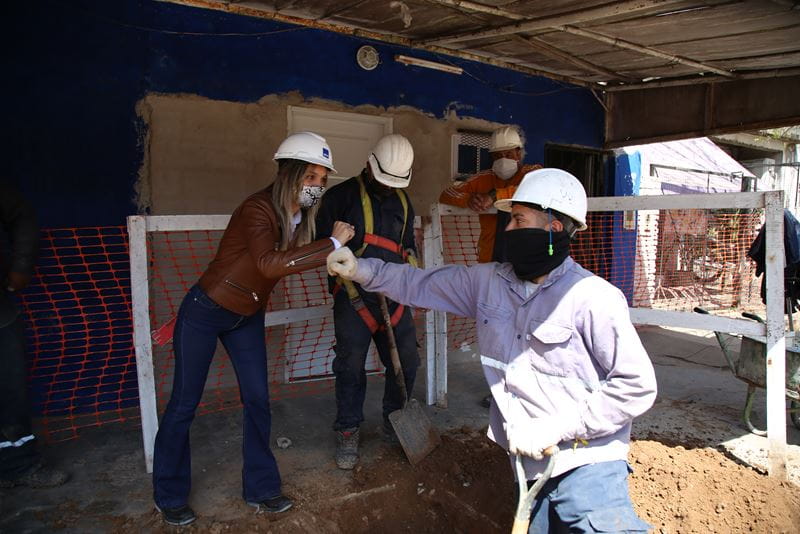 AySA also played a role in the use of sewage analysis for coronavirus detection.

“We were able to contribute to the health authorities through the development of a detection method for SARS-CoV-2 in wastewater and we carried out bleach delivery operations in neighbourhoods with vulnerable populations,” she added.

“For us, the pandemic is an additional sign of the need to accelerate the realisation of Sustainable Development Goal 6.”

Born in San Isidro, a city located in the Buenos Aires province, Galmarini has held various high-level governmental positions. This included a role as the Secretary of Health and Human

Development of the Municipality of Tigre, between 2008 and 2017.

With a degree in Political Science, Government and Administration, she was also the director of youth of the Ministry of Health and Social Action of the Argentine Nation.

Gender equality is another topic close to the AySA president's heart.

”From a very young age and from all the positions I have held, I promoted women’s rights and promoted to strengthen transformations to develop a social outlook,” she says.

“This is strongly rooted in the territory and forming teams with people with great sensitivity to understand people’s problems, especially the most vulnerable.”

Concluding, the AySA president adds: “All these challenges require a humble attitude and the construction of different, more genuine cooperation spaces in areas where the exchange of knowledge is facilitated.”