When Dr Mark Nelson and seven crewmates entered Biosphere 2 in 1991, sustainability was not a word commonly used. Climate change was only beginning to be talked about outside scientific circles.

An airtight terrarium in the Arizona desert, Biosphere 2 was designed to be a new kind of laboratory to study basic processes that occur on the earth – Biosphere 1. It was a prototype for large-scale support systems that would be needed if humans ever lived on other planets.

It contained a range of biomes including a rainforest, fog desert, freshwater marsh and mini ocean with a coral reef. Air, water and nutrient recycling systems were inter-connected and innovative methods of wastewater treatment, and reuse were used throughout the two-year habitation.

Nearly 30 years later, the lessons learned inside Biosphere 2 are more pertinent than ever and continue to resonate with an ever-widening audience.

In 2018, Nelson’s book Pushing our Limits: Insights from Biosphere 2 was published. Most recently the project was the subject of a new documentary, Spaceship Earth, which premiered at the Sundance Film Festival in Utah in January 2020.

The experience helped instil in Nelson an in-depth knowledge and passion for nature-based wastewater treatment systems as viable alternatives to energy and capital-intensive centralised plants, reinforcing his belief that ecological engineering was essential in creating a sustainable, even regenerative, future.

The concept is now gaining a higher global profile as companies, local authorities and municipalities seek to adapt to a circular economy and implement blue-green infrastructure as part of flood resilience and stormwater management strategies, particularly in urban areas.

Falling in love with nature-based solutions

"Our health depends on our biosphere, and it's urgent we use every approach to better understand how it functions – and how we humans can cooperate with our ultimate life-support system, not degrade it,” says Nelson.

He believes the Biosphere 2 project was 50 years ahead of its time.

“Biosphere and sustainability were very obscure academic words, but the world has caught up,” he adds. “The problems caused by the overall assault on our planet are known. We are now on the edge of all kinds of breakthroughs fuelled by peoples’ changing thinking of climate, and desire to become better stewards of nature.”

Nelson was already a respected ecologist when he was selected to be a crew member of Biosphere 2.

As the founder of the Institute of Ecotechnics, a research charity with a particular interest in technology to enhance and protect ecosystems, he had been involved in several innovative ecological projects around the world since the 1970s.

Inside Biosphere 2, he was responsible for managing a constructed wetland marsh recycling system for wastewater, which had been designed with NASA scientist Billy Wolverton.

So satisfying was this task, it went on to shape Nelson’s research, career and life after leaving Biosphere 2. He went onto to launch the company Wastewater Gardens International, which creates constructed wetlands and write a book, The Wastewater Gardener: Preserving the Planet One Flush at a Time.

“It was absolute joy in watching this engineered and technological system that put nature to work in an organised way,” he adds. “You add water and substrate media and the right plants, and you have a wetland. We processed 250-290 gallons of wastewater a day through our wetlands - I fell in love with it."

Sustainable wetlands: kidneys of the planet

Nelson has since designed and built beautiful wetlands around the world, each one reproducing the conditions of natural wetlands, removing impurities in a sustainable way and providing an essential habitat for wildlife.

They use no chemicals and often can be designed just using gravity flow, avoiding expensive equipment, and can work in a range of climates, from tropics to deserts. 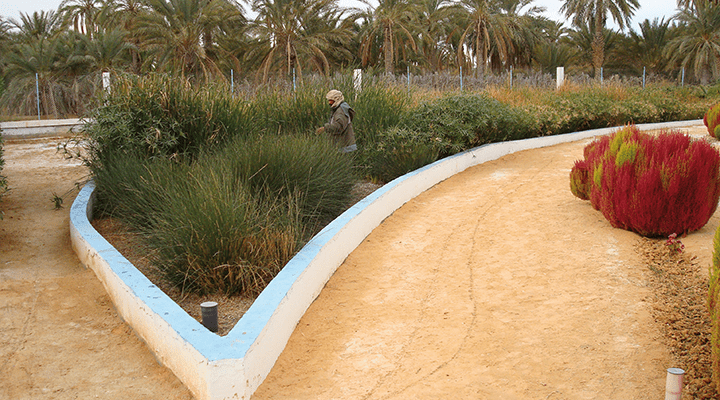 “Once regarded as worthless swamps because they cannot support agriculture, wetlands are now called the kidneys of the planet because they are so efficient at removing harmful compounds before these reach rivers, lakes or the ocean,” he says. “The plants store carbon dioxide, which is, of course, another plus for the planet.

"The pioneers of this type of natural treatment can be traced back to the 1950s, but Biosphere 2 was a great platform, as we were tracked by so many around the planet.

“People were fascinated by what happened to our pee and poo, so to realise that our beautiful wetlands system was thriving on those substances and they were completing the water cycle, was a message that went out to hundreds of millions.”

Nelson is buoyed that nature-based treatment projects are becoming more widespread but wants to see a rapid change to the technological landscape globally, leading to a faster implementation of more sustainable solutions.

“This type of technology is spreading but not fast enough,” says Nelson. “Humans are profoundly affecting the planet, and the consequences and disasters will increase significantly if we don't take action and implement better approaches. We have this impressive array of tools that would make life better for everyone and that are surprisingly affordable yet are not being implemented.

“We have this impressive array of tools that would make life better for everyone and that are surprisingly affordable yet are not being implemented.”

“We’ve always done our technology fixes without the whole picture in mind. We now need to redesign what I call the ‘technosphere’ to include more ecological engineering, where we still have engineering so we can be confident that what we’re making is efficient, but we try to do that by minimising machinery and expensive capital inputs and maximising natural, ecological mechanisms.

"Technology is of course a large part of the matrix of modern life, but it can be designed and redesigned in a more comprehensive way so that it is part of the solution to our problems."

Human action (and reaction) in water

Another life-affirming lesson for Nelson inside Biosphere 2 was the realisation that everything we do impacts the water cycle.

“Water is such a fundamental current for the life of our biosphere - everything we do on land has an impact as the water eventually drains into the ocean. That’s why I relish speaking to the water industry - this topic is so central to our lives

He adds: “There needs to be a continued elevation of our thinking towards more fully understanding the impact our actions have on the planet. I grew up in New York where it's hard to imagine rainforests or oceans creating oxygen, but that interconnection is very profound. The earth seems so large, you may think that you have little impact, but that is really an illusion.

“With every breath you take, you are dependent on and part of the metabolism of the biosphere. We are all beginning to see that business as usual involves systems that cannot go on indefinitely and which are causing great harm to both our health and the health of our world

“The stakes are unprecedented but the world is waking up to all of these issues, and this evolution has come at the right time. Every problem caused by humans can be solved by people using their intelligence and inherent love of life."

- Mark Nelson is a keynote speaker at BlueTech Forum 2020: Virtual - Innovating for Impact