Innovation Forum: The results are in

An antidote to conference fatigue

A Roman Forum. Gladiatorial battles in a Colosseum. Augmented reality. Fireside chats. Full interactive voting. These were just some of the reasons the all-new Aquatech Innovation Forum launched with a difference.

Setting out as the antidote to “conference fatigue” and “death by PowerPoint”, the Forum brought together nearly 250 people.

Kickstarting the wider Amsterdam International Water Week and Aquatech Amsterdam exhibition, the Forum was organised from the ground up with the overarching focus: Mastering Water’s Digital Transformation.

Some of the world’s most progressive water utilities, thought leaders, solution providers and entrepreneurs travelled to Amsterdam to share stories of digital innovation, ambitions as well as obstacles and challenges.

Described as “the most human-centric, engaging event” created, the Forum featured parliamentary-style debates that provided “some welcome provocative discussion between a variety of industry stakeholders”.

Throughout the day, facilitators and speakers used an interactive online tool and app called sli.do to vote on provocative topics, such as whether water companies will inevitably become Artificial Intelligence (AI) companies.

Below is a summary of the questions and audience polling results.

Each panellist had to put forward an argument for which ‘digital buzzword’ they wanted to banish to ‘Room 101’, the name taken from George Orwell’s 1984 and turned into a BBC TV series in which guests would send items to Room 101 to disappear forever.

Questions came up over the use of the word ‘digitalisation’, and the need for consistency among US and British spellings, as well as the difference to digitisation.

The “buzzword” that received the most votes from the audience was “agile” (33%), with Aarhus Vand’s Kjelds stating that every project, or development is now given the label agile without truly being agile. 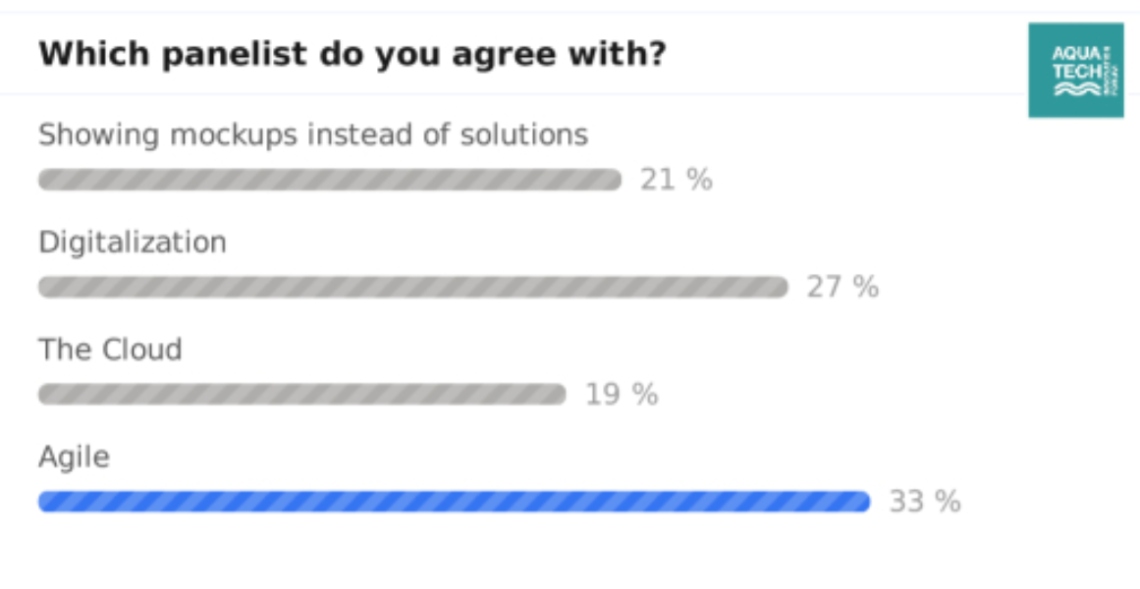 Gladiators battle it out over the role of AI

Prof Dragan Savić, chair of the IWA Digital Water Programme Steering Committee and CEO of KWR Water Research Institute took over as moderator, raising topics for his panellists to defend and argue against each other in a true gladiatorial style.

The audience voted to address the question of whether ‘Water service utilities will inevitably become AI companies’.

Suzenet argued for this, citing the disruption needed to improve water services.

Meanwhile Kaney argued against, saying that full accountability is needed and if AI makes one mistake, resulting in a “lake full of dead fish”, then the trust would be gone.

The final results can be seen below, with the vote being swayed as the panellists argued for and against the topic. 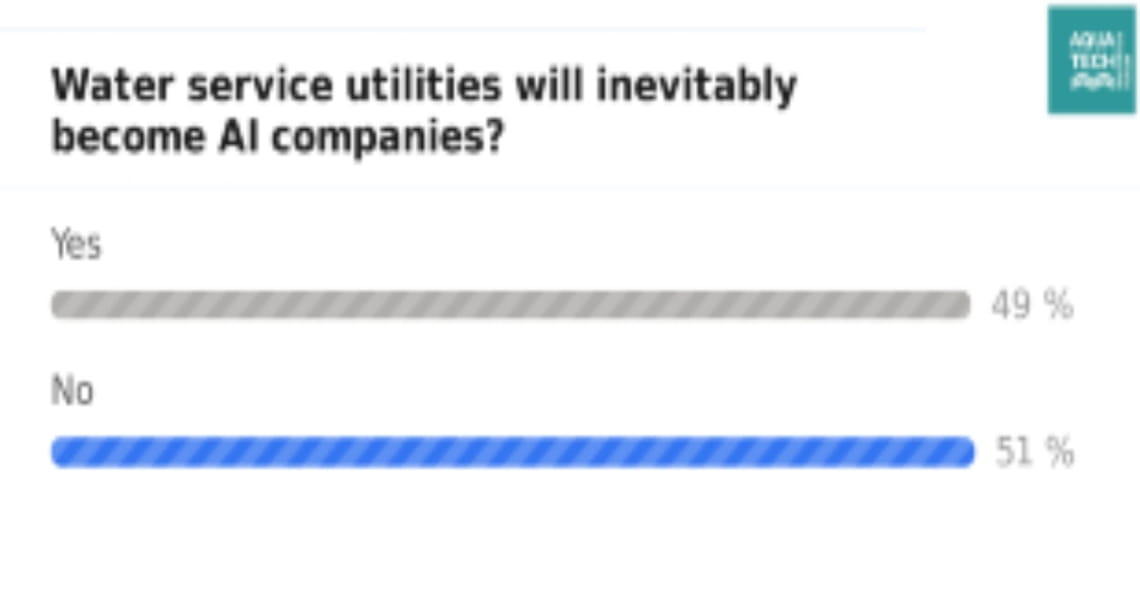 One of the attendees summarised the point nicely: the need for AI would be based upon a need for emotional intelligence (EQ).

Another question debated by the panellists was the question of whether digital solutions could be developed internally by water utilities. However, voting from the audience resulted in an unanimous “No”, with over 80% of the votes.

Two ‘Unconferenced’ sessions remained at the heart of the event in the Colosseum, hosted by Andrew Walker, managing director of Blue Gold Marketing and Will Sarni, founder and CEO of Water Foundry.

Walker kickstarted the session asking the audience and participants the question: Roughly how many innovations fail to be commercially viable? The final answer of 89% received the most amount of votes (62%).

“During the Unconferenced session we debated the barriers for innovation uptake, raising a greater awareness of these barriers. One of the key outcomes was that true collaboration can help to overcome ‘the curse of innovation’.” 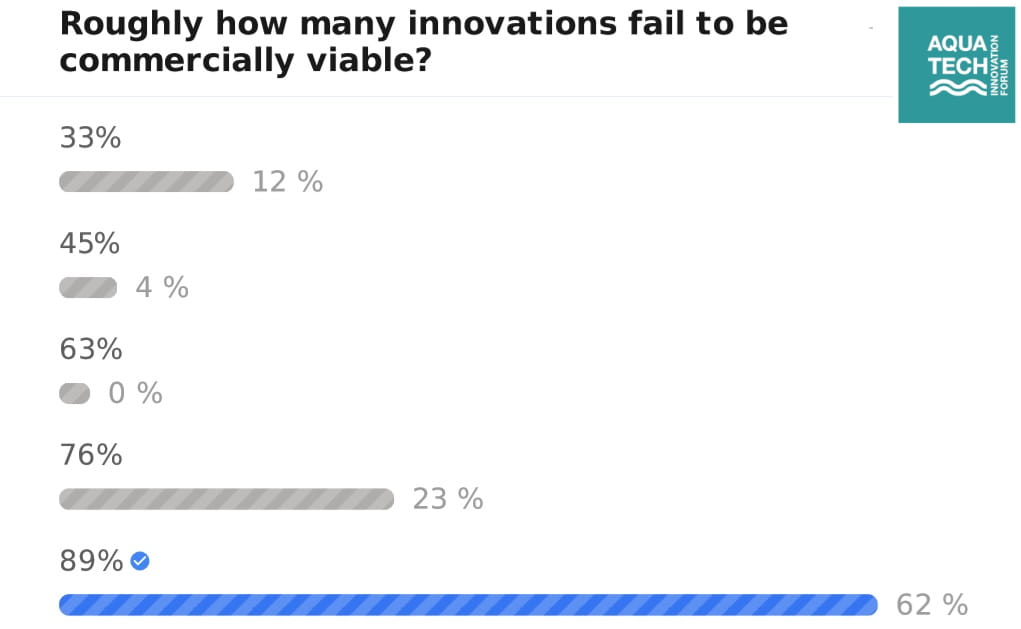 With a focus shifting to digital innovation, Sarni, together with Jan Gooijer, the innovation manager from Dutch utility Vitens and Avishek Chaudhuri, water industry advisor for Tata Consultancy Services asked the audience ‘What are the challenges to innovation and in particular digital technologies?’

Reflecting on the session and event as a whole afterwards, Sarni commented: “The Innovation Forum has spoiled me because it’s changed my expectations for other water events.”

A conservative culture within water utilities is often cited, or blamed for a slower than expected uptake in digital solutions.

It was previously referenced by Carla Reid, general manager and CEO of the Washington Suburban Sanitary Commission (WSSC) as “human driven resistance” – a phrase she again referenced during the Forum.

Collectively the panel addressed examples of plant automation in Spain, to solution interoperability from South East Water in the UK.

The audience was asked a question about the perceived barriers to smart water acceleration. The theme of ‘conservative culture’ topped the results, winning 57% of votes, followed by ‘Cost and affordability’ with 20%, as can be seen in the results below. 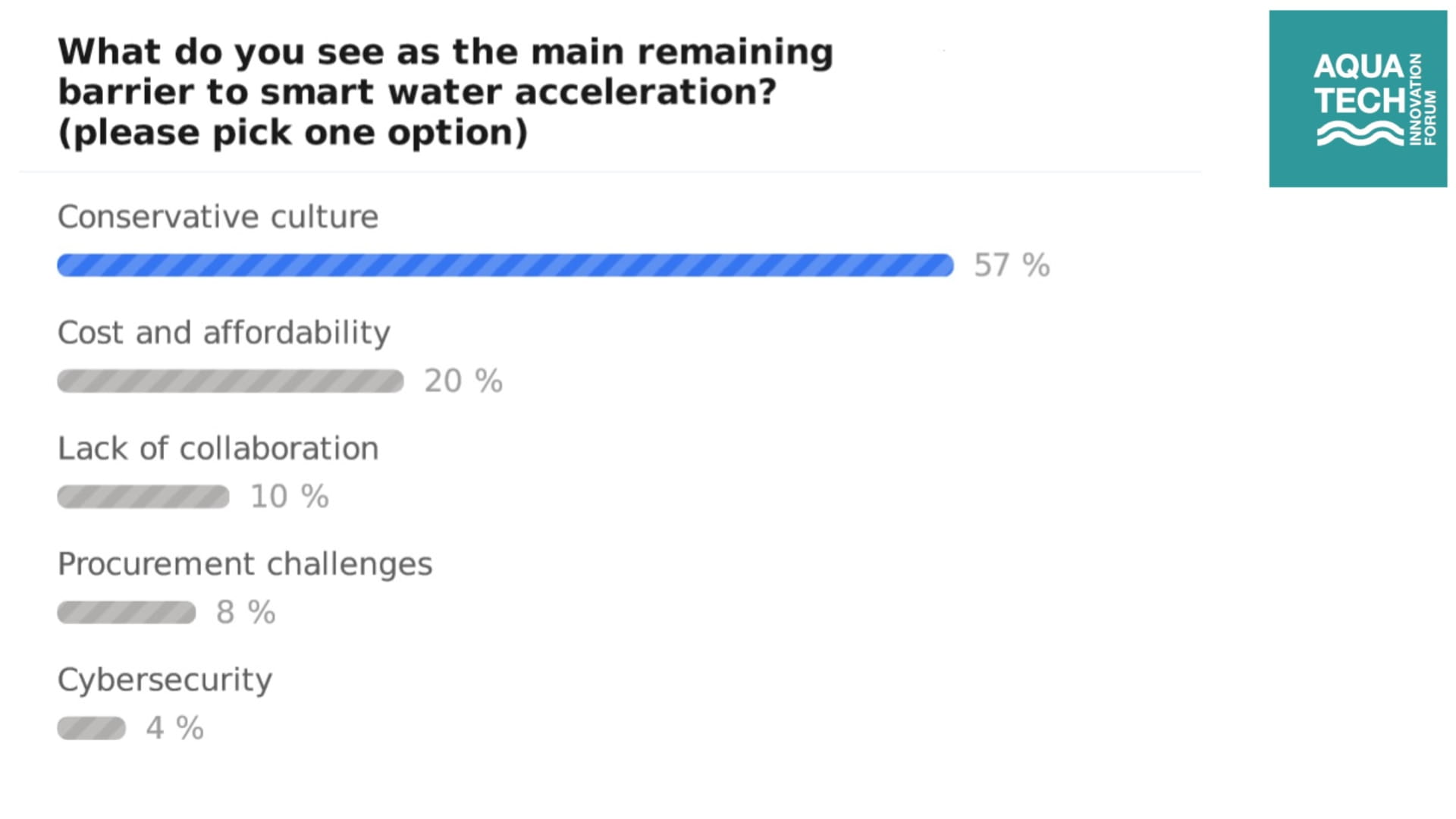 “Mindset is often referred to as the major excuse for lack of digitalisation but it’s not the biggest and only challenge,” commented Martinez.

Despite digitalisation efforts and technologies moving at a rapid pace, Webb instead slowed things down by orchestrating a ‘Zen’ moment in the room, asking people to stop, close their eyes and to imagine the water sector in 2040. He asked the question of what has changes and what has been solved?

Afterwards, Weisbord predicted that AI and augmented reality will be used more commonly for training new water operators. Meanwhile Solon raised the question of what do we want to achieve with digital – a circular economy?

Guerrier announced that €143 million would be invested up until 2027 in more than 50 projects across Europe.

“Simple automated processes are turning into data driven systems…over seven years we want to invest in the digitalisation of the water sector,” he said.

The Aquatech Innovation Forum in 8 pictures