Water leaders unite in Rotterdam ahead of COP24

Water leaders recently gathered in Rotterdam to collaborate and discuss the key themes ahead of the Amsterdam International Water Week (AIWW) Conference taking place next year.

Held onboard the SS Rotterdam Ship, the iconic venue was a suitable location for discussions on water and the wider climate change related challenges.

Kickstarting proceedings, Menno Holterman, CEO of engineering company Nijhuis Industries and chairman of the AIWW Managing Board called for “real, affordable and bankable solutions for water projects in light of climate change challenges”.

Ahead of the United Nations Framework Convention on Climate Change (COP24) taking place in Katowice in December, a keynote address was delivered by Tomasz Chruszczow, special envoy for climate change from the Ministry of the Environment, Poland.

He said: “We are facing extreme weather including droughts and floods. These are no longer horror stories happening elsewhere; they are now in our backyards.”

Chruszczow’s comments followed a report from the UN Intergovernmental Panel on Climate Change (IPCC) in October that warned only 12 years remain to keep global warming to a maximum of 1.5C, beyond which this could lead to “irreversible changes”. 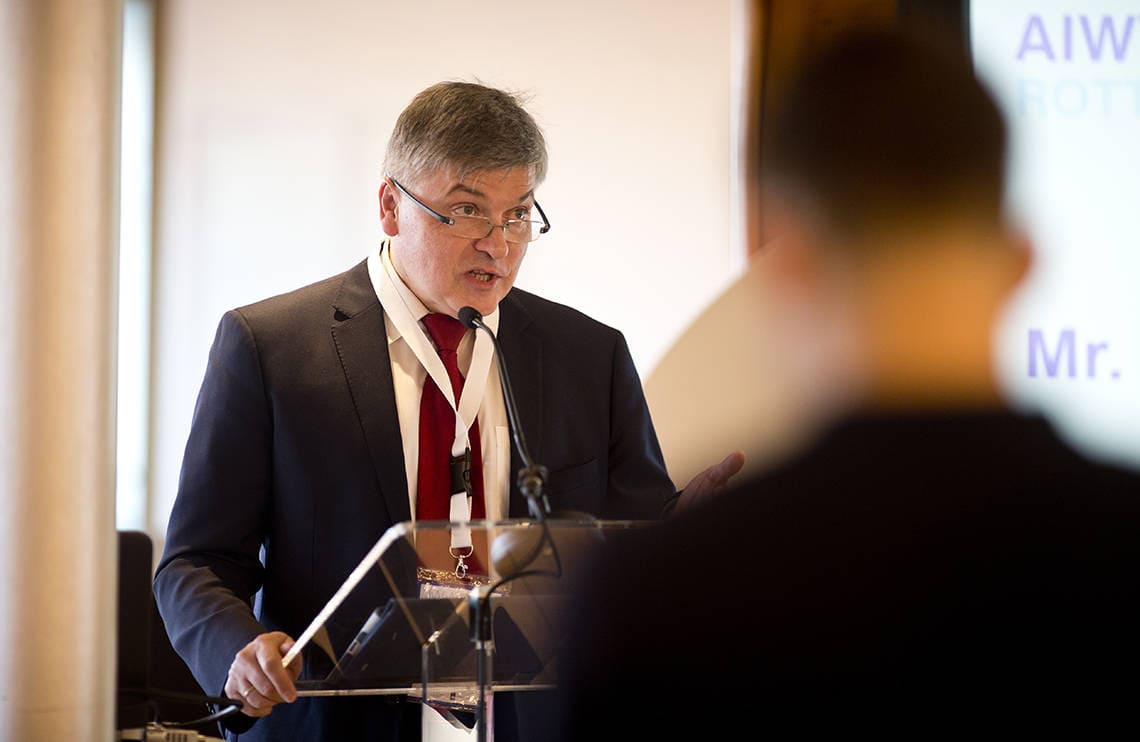 On water, Chruszczow made a strong call for “sustainable land and water management” to be included in the list of changes we need.

A mixture of water professionals attended the event, with 35 percent visiting from outside of the Netherlands.

The theme of the day’s discussions was the ‘Implementation of integrated solutions by cities, industries, utilities and finance.’

Multiple roundtable workshops took place on a variety of topics including: Scaling funds for water and sanitation services and ICT & Data innovations in water management.

The nine ‘Amsterdam Agreements’ signed at the AIWW 2017 were also discussed, including: Human cities coalition; Blue Deal: safe water for 20 million people and Water in the Circular Economy (WICE).

Speaking in his home city, the mayor of Rotterdam Ahmed Aboutaleb said the Netherlands has an obligation to share its water knowledge with everyone around the world.

He referenced a collaboration in Ho Chi Minh City in Vietnam, in which Dutch engineers worked to reduce leakage levels “while the city sleeps”. He added: “Now the city has a lower leakage level than London.”

Despite Brexit negotiations making headlines around the world, the European Commission (EC) attended the event and referenced the success to date of European-wide water regulations.

In a passionate speech, Veronica Manfredi, director for Quality of Life at the EC said the Urban Waste Water Treatment Directive implemented back in 1991 is a single piece of regulation that “completely changed our seas”.

Looking ahead, she called for four “accelerators” needed to move the needle on sustainable water management, including a “much better use of digital technologies” to help harness the sheer levels of data being generated.

Following the day’s workshops, four main topics were recommended to be taken forward as the main themes for the AIWW Conference 2019, to be held at RAI Amsterdam. These included:

Several distinguished experts also gave their recommendations for the AIWW Conference 2019 in a panel discussion.

Henk Ovink, special envoy for international water affairs for the Kingdom of the Netherlands provided an animated and honest commentary.

“Questioning the audience, he asked: “Do we understand the links between water and health, or water and food?””

He called for commitment between stakeholders, calling for an end to pilot projects without commitment. “We need agreements with commitment and consistency…otherwise it is like proposing to a man or woman and then running away,” he said.

“Often the creativity part is lacking. Sometimes we attempt to solve problems with technologies that are used elsewhere.”

Following the conference, the next step will be funnelling the discussions, feedback and outcomes into the event programme for the Amsterdam International Water Week (AIWW) taking place 4-8 November, 2019.