Drones, or Unmanned Aerial Vehicles (UAVs), are increasingly being used to help speed up monitoring processes in the water sector.

A South Korean institute believes it can increase the speed of monitoring for algae in water by 90 per cent with the “world’s best level of accuracy in algae prediction”.

The government funded Electronics and Telecommunications Research Institute, known as ETRI, has developed a system that combines drone and a hyperspectral camera technology. 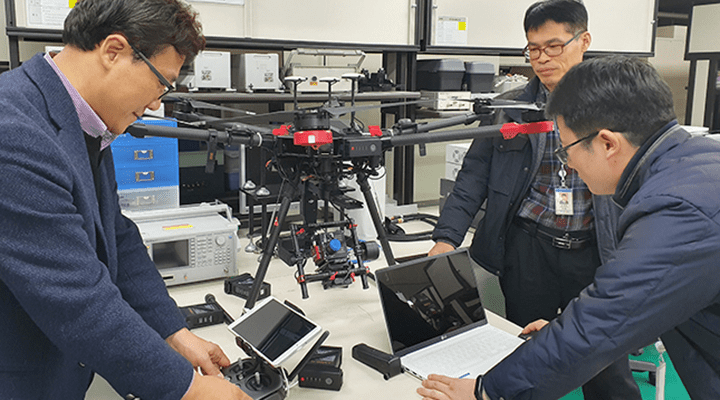 An existing process was “cumbersome as it required physical site visits, making it difficult to respond quickly before the algae bloom spread”, the institute said.

According to the researchers, a hyperspectral sensor is the key part of the system, able to divide visible and near-infrared regions into 200 or more colours. In comparison, conventional images divide light into the three primary colours (RGB).

The hyperspectral sensor is used to indicate whether the algae is at one of three levels: Attention, Warning or Outbreak.

Data is then analysed using Artificial Intelligence (AI), which ETRI said “helps predict where the green macro-algae will bloom after seven days, making it more effective to respond proactively”.

Testing the system, ETRI first deployed the drone to Daecheong in South Korea.

The next phase is for the team to construct a real-time monitoring map of algal blooms in the reservoir. Both the weight and size of the sensor will be reduced by 2022, ETRI added.

Dr Yong-Hwan Kwon, project manager at ETRI, said: “We have the goal of achieving the world’s best level of accuracy in algae prediction.”

He added that the institute plans to make it possible to “track the growth of blue-green algae” to help facilitate early responses.

According to research from Goldman Sachs, the drone market was forecast to have grown to a $100 billion market size between 2016-2020.

In the New Zealand city of Auckland drone technology is being used to collect water quality samples, resulting in a 30 per cent saving in operating costs.