The blue footprint of green transport

Electric vehicles are leading the clean energy transition in transportation. EVs are low in carbon, but are they sustainable when it comes to water?

The largest electric vehicle manufacturer in the US is looking at water treatment for its new Texas factory.

Almost certainly Tesla – the company is unnamed in the supplier announcement – the new manufacturing facility will feature equipment from H2O Innovation.

The Canada-based industrial and wastewater treatment company secured the engineering contract to design two identical reverse osmosis (RO) trains, each rated at 2,200 m3 /day, as part of a $3.2 million series of deals.

The move reflects increasing concerns that while EVs reduce the environmental impact of transport, when it comes to water use in manufacturing vehicles and the batteries that power them, the industry is falling behind.

Gigalitres for the Gigafactory?

Telsa announced that it is building a new Gigafactory near Austin in Texas in mid-2020. It is looking at reducing the water impact of its latest large-scale manufacturing development.

The company has also recently sought to downplay concerns over water use at its new European factory being built in Gruenheide, in Brandenburg, Germany. 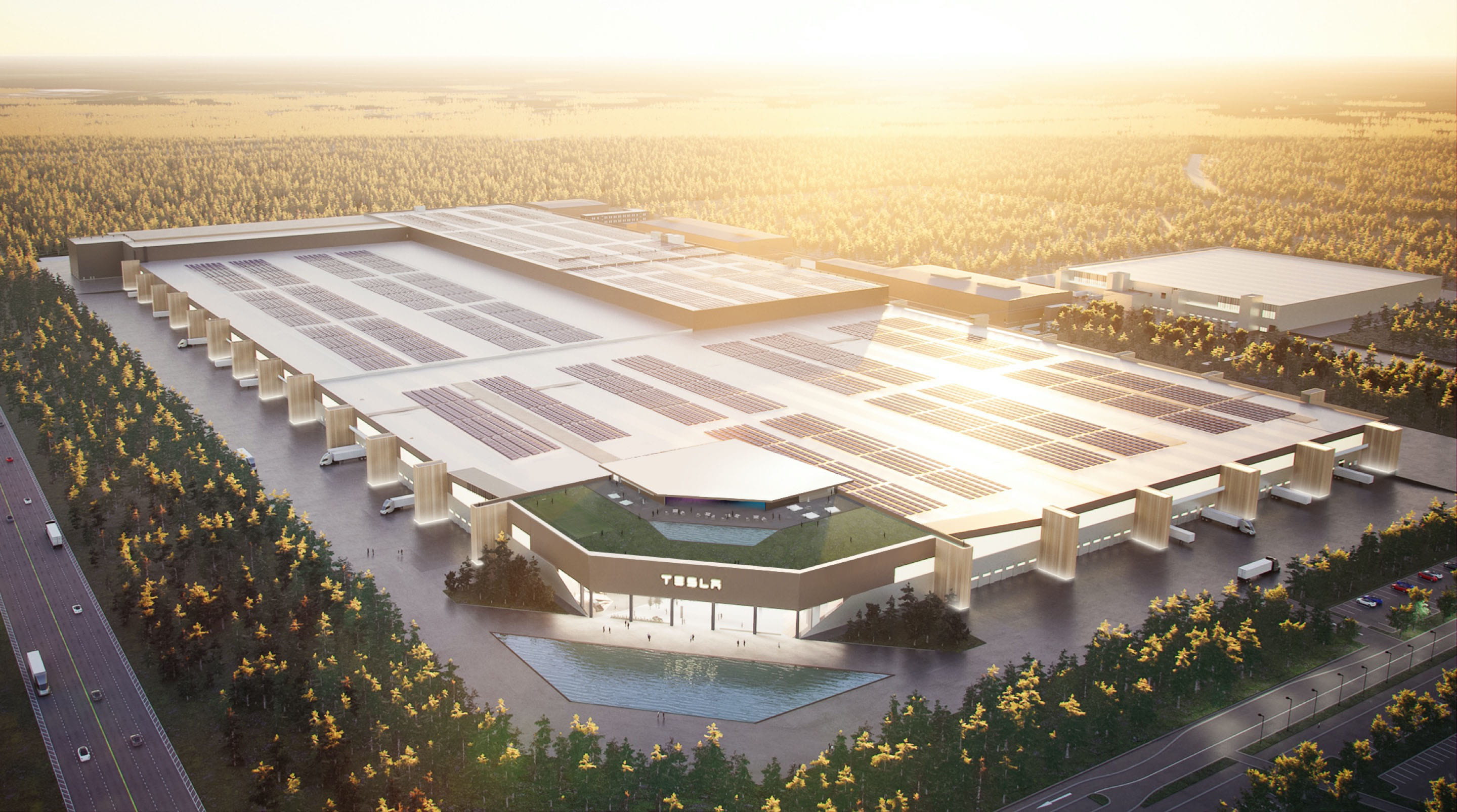 According to Reuters, last year Tesla CEO Elon Musk announced that the plant would use far less water than had been initially estimated in its planning application. Originally it had been suggested that the plant may need 372 cubic metres of water every hour, to be supplied from the public network.

“Tesla won’t use this much net water on a daily basis. It’s possibly a rare peak usage case, but not an everyday event,” Musk clarified.

In September last year, the local Strausberg-Erkner water association (WSE) approved a contract to supply the factory, the first in Europe for Tesla.

This will reportedly see significantly reduced estimated peak water use to 243 m3/hour and wastewater from 252 m3/hour an hour to some 177/ m3.

Commendable efforts to reduce the environmental impact of manufacturing must also be put into the broader supply chain context. Lithium and cobalt, which are some of the critical elements found in EV batteries, are typically considered very water heavy in production, for example.

Indeed, considering that power generation can also be a water-intensive process, it has been suggested that in a worst-case scenario, battery EVs may consume up to 70 times more water than their internal combustion engine equivalents.

“In a worst-case scenario, battery EVs may consume up to 70 times more water than their internal combustion engine equivalents.”

For example, one calculation from Germany’s Helmholtz Institute for Electrochemical Energy Storage has shown that the lithium needed for a 64 kWh battery would require some 3840 litres of water.

Lithium is often produced by evaporating a brine which is rich in lithium carbonate. But compared with the 46 billion litres of water needed for global oil production, this is minuscule.

"With this water, you could win lithium for 1.5 million Tesla batteries every day," Dr Maximilian Fichtner, director at the Helmholtz Institute, reportedly said.

Even as EV production ramps up, their water impact is likely to remain far below that of fossil-fuelled vehicles. This is especially the case as EVs are increasingly set to be powered with renewable energy. This does not require large volumes of cooling water used in thermal power generation facilities.

Tesla is leading the EV charge, but some of the world’s largest automotive producers are accelerating their move to electric power trains. For example, Jaguar Land Rover (JLR) recently announced its plans to go all-electric by the middle of this decade.

Volkswagen brand Audi is one company that is pushing an EV strategy while also investing in reducing its operations' water impact. It plans for EVs to make up 40 per cent of its sales by the middle of the decade. Audi said the launch of its etron GT is a “Celebration of Progress”. Can the same be said for its water efforts?

As a result, the company has put a new water treatment centre into operation at its Ingolstadt site, which is also ramping up the switch to EVs.

With an existing treatment plant, the new membrane bioreactor (MBR) will allow around half of the wastewater produced at the site to be recycled, saving up to 500,000 m3/year.

“We are reducing freshwater requirements at the Ingolstadt site by one third and avoiding 40 per cent of wastewater," said Rüdiger Recknagel, head of environmental protection at Audi.

Another VW subsidiary, ŠKODA AUTO, has outlined water-saving measures in its GreenFuture strategy. It now requires 1.7 m3 of water to produce one car, nearly 40 per cent less than in 2010.

The company claims it recycled some 42 per cent of the total water it used last year (1.5 million cubic metres) using membrane filters in its paint shops, for example.

General Motors is also turning to EVs and plans to offer 30 new EVs globally by 2025. In a joint venture with LG Energy Solution, the company has set out ambitions to mass-produce some 30 GWh of vehicle battery cells in Northeast Ohio.

“GM has been working toward reducing water intensity by 15 per cent over the last decade.”

At the same time, GM has been working toward reducing water intensity by 15 per cent over the last decade. This follows a 32 per cent water reduction per-vehicle achieved between 2005 and 2010.

It is clear that all vehicles have an environmental impact and EVs are no different. However, with a greater focus on sustainability, automotive manufacturers are cutting carbon emissions associated with their products and at the same time making their operations more sustainable for water use too.