Just do it: Nike races ahead on water targets

Reduction in freshwater use

Some of the greatest athletes in history have proudly worn Nike’s iconic ‘swoosh’ logo, helping it to become one of the world’s most recognisable sports brands.

Valued at $15.9 billion, the US apparel giant has grown far beyond its roots as a footwear company: it’s become an inspirational symbol.

Yet behind the scenes, how does the company rate when it comes to water use – a key challenge and opportunity for any mega manufacturer of textiles in a traditionally water-heavy industry?

According to its FY2019 Impact Report, it appears the company is embodying its motto to 'Just do it', certainly on reducing freshwater across its supply chain.

The company has actively reduced freshwater used across its global operations.

However, on the wastewater side, only just over half of its suppliers met quality requirements, according its recently released FY2019 Impact Report.

No planet, no sport

“If there is no planet, there is no sport. It is this understanding that drives the urgency of our commitment to sustainability and impact.”

That was the message from John Donahoe, president and CEO of Nike, who in his Impact Report message connected the “growing climate emergency” to the “voice of our athletes”.

He said: "As marathon start times get moved into pre-dawn hours and players and fans suffer from heat exhaustion due to extreme weather conditions, those who work in sport see first-hand the damaging effects of climate change. This crisis is affecting the athletes we serve – not someday, but right now – and in turn compelling us to swiftly evolve our business."

The CEO referenced the company’s pledge to eliminate footwear manufacturing waste to landfill or incineration, as well as increasing the use of more sustainable materials.

This includes turning one billion plastic bottles into recycled polyester per year, for footwear and apparel.

The Nike FY19 Impact Report showed the company has avoided using 23 billion litres of water as a result of efficiency programmes implemented since 2016. 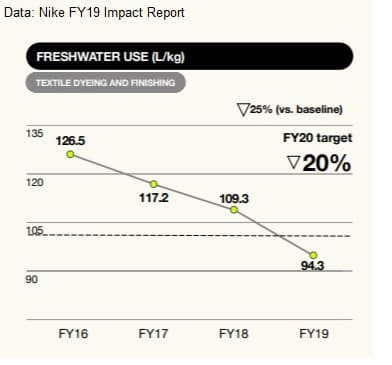 According to the Sustainability Accounting Standards Board (SASB), an independent standards-setting organisation, in 2019, 98 per cent of the company's focus suppliers met wastewater legal compliance.

However, only 51 per cent met Nike’s Wastewater Quality requirements.

The ZDHC guidelines were introduced in 2015 and are designed to help meet a vision of a "supply chain with zero industrial wastewater discharge".

On the energy side, while Nike has improved the amount of renewable energy across its operations to 27 per cent, its energy consumption per unit (key operations) increased last year by four per cent.

How Nike achieved the water reductions

In the Impact Report, Nike said the fundamental challenge with water remains: while the company uses less, manufacturing of textiles requires more of it.

It was in 2017 when Nike developed its own ‘Water Minimum Program’ across its supply chain.

This required suppliers to create site-water balances and understand where their water is going. Furthermore, operational data from wastewater treatment systems are also collected. 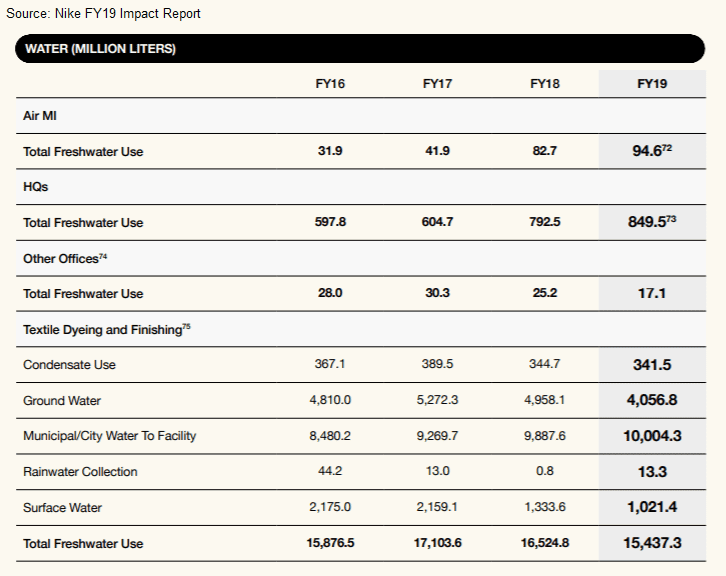 Data on freshwater withdrawal and production each month is used to create a monthly dashboard to share and discuss with suppliers, effectively creating an in-house competition.

“Once suppliers saw how their water efficiency stacked up against their peers, some realized they could do better,” the company added.

Suppliers who were “water inefficient” then took the initiative to install more water-efficient dyeing equipment, or wastewater recycling to reduce freshwater footprint.

Nike said that to drive its freshwater footprint as close to zero as possible, it teamed up with key textile dyeing and finishing manufacturing facilities to "attack the challenge from multiple angles".

This included championing wastewater recycling, starting at the Ramatex facility in Suzhou, China.

By the end of FY19, that commercially available recycling system helped Ramatex reduce its freshwater withdrawals by 60 per cent from its FY16 baseline.

"Vendors have demonstrated the potential to save up to an 80 per cent reduction through implementing recycling systems."

While not mentioned in the Impact Report, a previous Nike initiative is worth noting.

A partnership with Mexican knitted textile supplier, Vertical Knits, enabled the firm to reduce water by 85 per cent per kilogram of fabric, through innovative techniques and manufacturing.

Cleaning up the ‘Dirty Laundry’

It was in 2011 when Nike and other multinational brands came under the spotlight for their manufacturing practices.

A report was launched from environmental campaigner, Greenpeace, titled ‘Unravelling the corporate connections to toxic water pollution in China’.

The policies and practices of Nike, Adidas and Puma were examined in particular detail as all three have been recognised by external bodies – such as the Dow Jones Sustainability Index.

At the time, Greenpeace said while many companies appeared “concerned about water quality”, the investigation found that “toxic chemicals” were being released into the surrounding water and local river systems by their suppliers.

However, both Nike and Adidas were praised for going beyond regulatory requirements with restrictions on perfluorooctanoic acid (PFOA) and applying the same legal limit as used for perfluorooctane sulphonate (PFOS).