A new lighter, energy-efficient Japanese water recycling technology is being tested on the International Space Station.

The International Space State (ISS) is a great example of a closed-loop system where water recycling is not a luxury or optional, but essential to keep astronauts onboard alive.

By filtering out impurities and contaminants from astronauts’ urine, sweat or even moisture from their breath, the produced potable water can be used again and again to drink, rehydrate and even bathe.

As a result, the systems and technologies used are 'mission critical', as a failure would result in the ISS running out of water.

Despite water recycling systems already in operation on the ISS, Japanese engineers are looking to improve the energy consumption and weight and size of the technologies.

Later this year, “verification testing” of a new system will start in the Japanese experiment science module, nicknamed 'Kibo', on the International Space Station.

The updated technology promises to be a lighter, smaller water recycling system that uses half the energy of existing technology.

A joint research agreement started in 2011 between Kurita Water Industries and the Japan Aerospace Exploration Agency (JAXA), resulting in an order being placed in October 2015 to manufacture a new system.

Since then, the two organisations have tested performance stability and verified durability under the conditions of use at the ISS to establish the specifications for the equipment.

One of the broader ambitions for the project is to build what is being called an independent Environmental Control and Life Support System (ECLSS) for manned space explorations in the future. 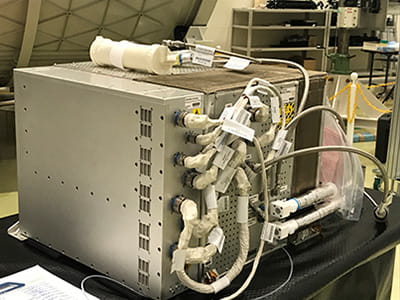 How does water recycling in space work?

Using the new system, a water recycling rate of 85 per cent of higher is achievable using ion-exchange, electrolysis and electrodialysis units, according to Kurita.

To purify urine to a potable water standard, the treatment system removes calcium and magnesium components contained in the urine through ion exchange, subjecting the organic matter to electrolysis, and removing the ions through electrodialysis.

Persistent organic matter can be broken down by the electrolysis is carried out under high temperature and high pressure.

Furthermore, since the resin for the ion exchange unit is regenerated within the system, it eliminates the need to replace consumables.

How does water recycling

The ISS can recycle approximately 6000 litres of water per year but also has 2000 litres of backup water in case of an emergency.

Thankfully astronauts are trained to use minimal amounts of water for daily activities.

According to the European Space Agency (ESA), one astronaut uses about 0.5 litres of water per day for hygiene purposes. This compares to 50 litres typically used for showering and bathing back on earth.

In an infographic produced for World Water Day, ESA astronaut Frank De Winne said: "On a given day, you drink a cup of coffee. The next day you drink the same cup of coffee again, and a few days later, you end up drinking your colleague's cup of coffee as well."

In a popular video featuring former ISS commander Chris Hadfield, he said: “Before you cringe at the thought of drinking your leftover wash water and your leftover urine, keep in mind that the water that we end up with is purer than most of the water that you drink at home.”

He referred to the ISS as its own “self-contained environment” that’s a critical step towards living for long periods off of planet earth.