Is biomonitoring the future? A chat with Orb’s CEO, Lorenzo Falzarano

Could biomonitoring help to cut down regulatory time and costs? Andrew Godfrey sits down with Orb’s CEO Lorenzo Falzarano to talk about the water technology company looking to disrupt the status-quo.

“There's a crisis beneath our feet.”

Lorenzo Falzarano, CEO of a biomonitoring start-up, is a straight talker when it comes to the major water challenges in the world. Yet, he has a solution.

“Access to water and its quality is degrading,” he says.

Falzarano’s molecular diagnostic device can detect the risk from pathogens and other contaminants. Fitted to a pipe, the sensors can provide data on bacteria and viruses that could be present in water.

Water monitoring technology is in high demand at the moment, as utilities across the globe look to get ahead of their future water concerns by having technology that can track, in real-time, what is in their water.

Another recipient was Orange County Water District, which Orb has worked with, received $102,700 from the same bursary. 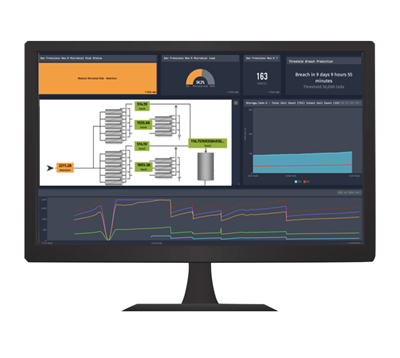 The meaning of LIFE: How it works

Orb's sensors use fluorescence monitoring, known as its LIFE system. By using high-energy deep-UV photons and neural nets, the sensors probe the water for compounds such as amino acids, proteins, DNA, microbial cells and their metabolites.

“The CEO claims the solution offers microbiology without the need for a laboratory.”

The monitors feed the information for these four parameters into an online portal that the company says, "enables water quality managers to instantly react to minute changes in the biostability of their water process or distribution system".

The ambitious CEO claims the solution offers “microbiology without the need for a laboratory”.

Instead, the organisation sees its system as a way to heavily reduce the current regulatory model for water monitoring that is carried out by trained laboratory staff.

“Right now, you're only detecting around one per cent of microbes present when you're using the plate count method. And you take that sample once per week. That's just not enough to run an optimised system,” Falzarano says.

“But the key thing here is that you currently take three to five days to get those results whereas we can do that in one second online and distributed. So that's what we've been doing. Fast, simple, economical detection diagnostics for the water resilience.”

For the Anglian Water trial, Orb’s two biological monitors were placed to detect small microbiological changes in the water quality. They were used to establish accurate cell counts of the utility’s lab-based flow cytometer to see whether they correlated.

“This is the end of a second year of pilots with Anglian Water on their assets,” Falzarano says. “Last year they [Anglian Water] also onboarded Cranfield University to put our system through its paces.”

“They did an Ingres experiment where they spiked the known quantity of water with 400 cells per spiking dose. We were able to pick up each one of those doses at 400 cells each. And then two hours later added chlorine, boom, straight back down to baseline levels.”

Orb showed that it was able to produce similar results to an on-site water sample collection but rather than wait a couple of days for the results they were available instantly.

Fitting into a growing market

So where does Orb fit into an increasingly competitive market on water quality monitoring?

“At the moment, we’re focusing on the utilities market but we do have relationships with some industrial customers,” he says with a smile.

“The fact that we've made it plug and play and can be remotely monitored means that there's a lot of interest. And so what we've had to do is focus that interest because water enters every aspect of our society. It's the bedrock of it, for want of a better term.”

“We've got interest to monitor water in cooling towers, food and beverage and consumer package goods process and ingredient water.”

It would seem then that Orb is taking the time to position itself as a tool for wide range of sectors.

“In our experience, there seems to be a genuine desire to better understand water quality,” he says. “To go above and beyond what's regulatory required more so here than in other territories.

“We're starting with the utility market, but there are adjacent markets that we're looking at.”

You also say that the CEO is looking at opportunities beyond planet Earth.

To infinity and beyond: remember the name

Falzarano laughs excitedly. “There is nowhere more prevalent an example of a closed loop water than the space station,” Falzarano says. “This morning's urine is tomorrow morning's coffee!”

Using its fluorescence spectroscopy in combination with machine learning algorithms, Orb will be able to detect and quantify a large range of contaminants in water during space exploration.

“The way they currently monitor for microbiology is they take a sample, filter it through a membrane and then freeze it at minus 82 degree Celsius.

He takes a deep breath. “And then they tell you what was happening to it however many days have passed since the last space module, or capsule went up there.”

The CEO adds: “The same thing applies to Earth, and any closed loop system. We see ourselves as the enabling technology for the increase in demand or the need for water recycling and reuse.”

Technology for the future

Despite the listed multiple benefits, there is the feeling that this technology could complement, rather than replace, current laboratory sampling methods and help existing ways of water monitoring to become more efficient.

“I'm not going to say better, I would say complementary,” Falzarano agrees, when asked about replacing the current regulatory method.
“They are different technologies - they can't be compared. There's no correlation to a plate count method, which has some issues, but it's served us well for the last 200 years.”

Being used an early warning system will allow for resources to be better utilised and constantly collect data.

“You’re never going to get continual trend monitoring over time using grab samples. So what we see is that, we don't see ourselves as replacing the regulatory methods.

“We see ourselves right now as complementing those methods. And then over time, when we captured in enough data across industries and in the field on live assets, we build up that confidence.”

Falzarano concludes with a quote that perhaps summarises his mission to keep innovating in this space.

“Just because it's regulatory required, doesn't mean it's optimal.”