Fight, floods and contamination – the cost of conflict on Ukraine’s water supply

A new report from The Conflict and Environment Observatory documents how Ukraine's water supply is impacted. We looked into the findings.

Military conflicts have historically targeted water and wastewater infrastructure for their strategic value.

The ongoing conflict in Ukraine is no different. Water supplies and resources have been impacted in several ways, leading to increased pollution incidents.

Estimates from the UN suggest that by August 2022, 16 million people need assistance with water, sanitation and hygiene. In eastern Ukraine, around 1.4 million people lacked access to piped water.

A new report from the Conflict and Environment Observatory (CEOBS) entitled ‘Ukraine conflict environmental briefing’ has explored and documented the reported damage and disruption to water infrastructure and supplies. 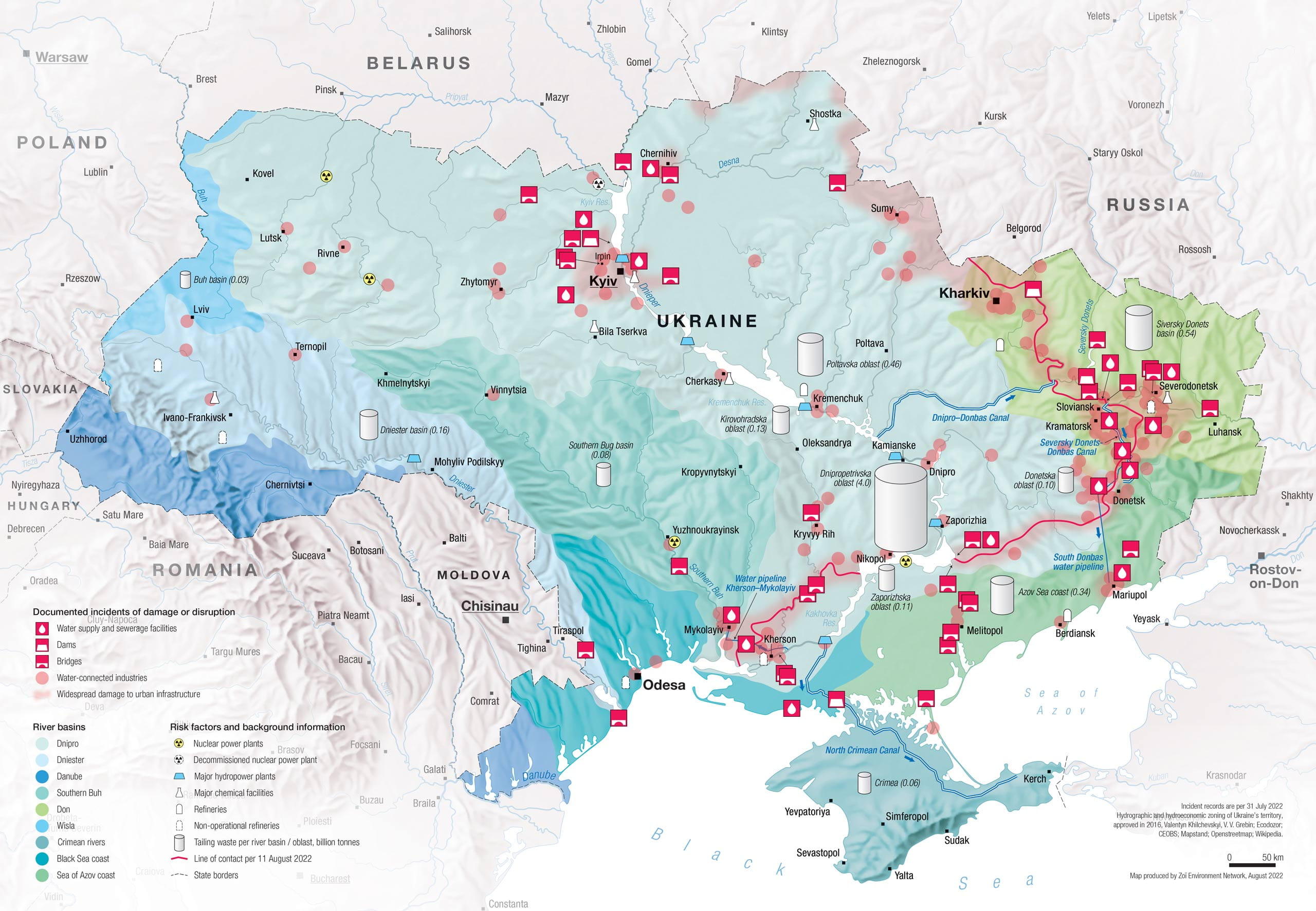 It’s the second in a series of thematic briefings on the environmental consequences of the armed conflict in Ukraine.

How bad is the damage?

Both direct and indirect damage and disruption have led to the loss of water supplies in Ukraine.

“The sewage flooding into the streets in Mariupol represents a health risk.”

CEOBS cited the Popasna site near Bilohorivka, northern Luhansk, targeted on multiple occasions in May, with damage sustained to the filtration station, lift station, and electrical equipment.

Furthermore, at least four dams and reservoirs sustained direct damage. One notable example is the Oskil Reservoir on the Siversky Donets River near Izyum, which had its gates destroyed in March.

As the eighth largest reservoir in Ukraine, it was rapidly emptied, raising downstream river levels.

Earlier in the year, an expert for the Polish Waterworks Chamber of Commerce spoke at a Water Action Platform event about supporting Ukraine with equipment such as pumps.

Multiple reports of attacks or disruptions to wastewater treatment infrastructure led to wastewater discharges into local rivers, with even one incident on the Dnipro River visible from space.

“The flooding of sewage into the streets in Mariupol represents a health risk, especially because people are reportedly using this water to wash and clean in, even if the risk from cholera is thought to be overstated,” said CEOBS.

“Properties in Demydiv were flooded, particularly the basements people were sheltering in.”

The report said the loss of access to piped water led to an increased number of people turning to wells. While groundwater meets 25 per cent of Ukraine's water supply, it remains heavily contaminated in certain areas.
Furthermore, aquifer contamination is likely to be exacerbated by pollution linked to the conflict, CEOBS added. Other sources of contamination resulting from the conflict include contested river crossing points, where large numbers of damaged vehicles remain.

Flooding of the River Irpin from Kyiv Reservoir

One notable case study referenced in the report was a dam between the Irpin River and the Kyiv Reservoir, which was heavily damaged in February.

This led to floodwater accumulating in the Irpin river valley, flooding the towns of Demydiv and Kozarovychi (as seen in the image below).

From the incident in late February through to mid-August, a total area of 28 square kilometres was flooded. Properties in Demydiv were flooded, particularly the basements people were sheltering in, prompting efforts to pump water back into the reservoir.

The report firmly states how “water infrastructure is indispensable to the civilian population” and that all conflict parties “must take immediate and urgent stops to prevent further damage”.

The organisation said that “conflict parties must withdraw military forces from critical water infrastructure, including hydroelectric power plants, to reduce the risk of severe incidents and to help minimise damage to such sites”.

It stated that "urgent and ongoing safety inspections" are needed on critical water infrastructure to help assess the environmental and humanitarian risks associated with the conflict-mediated damage and disruption.

- The full copy of the CEOBS report can be found here.