The world's first bubble barrier is being used in the Dutch river of Oude Rijn, in Katwijk, to help remove plastic waste from the waterway and stop it from entering the ocean.

Called the Great Bubble Barrier, the concept uses a 120-metre stream of rising bubbles that work in tandem with water currents to push plastic waste to one side, before being collected.

Following a successful 2019 pilot in an Amsterdam canal, the project caught the attention of Rijnland water board, 12 municipalities and the Holland Rijnland and Zuid-Holland regions to invest €470,000 to build their river bubble barrier.

So how does it work?

Air is pumped through a perforated tube that sits on the bottom of the waterway, generating a screen of bubbles that blocks plastics and directs suspended plastics to the surface.

The diagonal placement of the bubble curtain in the waterway guides plastic waste to the side and into the catchment system. Plastic is collected across the fu¬ll width and depth of rivers, before ending up in the ocean.

The company says the system does not interfere with regular river activities and is operational 24/7.

The Great Bubble Barrier was also previously featured in an Aquatech Online article – 5 European companies helping to clean up the oceans. 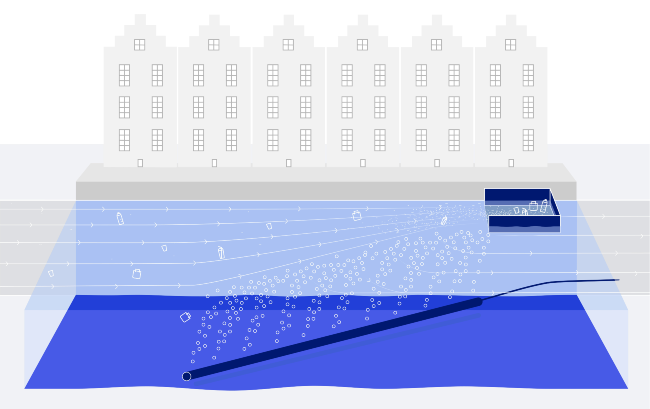 A collaboration to fight plastic pollution

The use of the Bubble Barrier came after the Coast Busters, a local initiative focused on raising awareness of plastic pollution, decided to tackle the growing plastic pollution in the Netherlands waterways.

“Every year, more than one million pieces of plastic end up in the North Sea at Katwijk. That amounts to more than two tonnes of plastic which poses a great threat to our ecosystem and our food chain,” said Claar-Els, a member of the Coast Busters.

The Bubble Barrier system has been tested and can catch plastic particles as small as one mm and intercept 86 per cent of floating test material in inland waters.

“Every year, more than 1 million pieces of plastic end up in the North Sea at Katwijk.”

“The Bubble Barrier positively contributes to clean and healthy water. Thanks to the bubble screen, we ensure that plants and animals are protected from plastic pollution and therefore contribute to increased biodiversity,” says Waldo von Faber of the Rijnland Water Board.

The Coast Busters are planning on building an education and monitoring centre to create awareness about the amount of plastic in the Dutch waterways. It will also monitor and analyse the type and amount of plastic collected by the Bubble Barrier.

The Great Bubble Barrier is run by a team of keen sailors, surfers, and water enthusiasts, who won an international Postcode Lottery Green Challenge in 2018.

“We are particularly proud to see communities empowered to take action and reach out to us like the Coast Busters,” commented Anne Marieke Eveleens, co-founder at The Great Bubble Barrier.

“It shows the power of collaboration to solve plastic pollution.”

In the UK, marine conservation charity Surfers Against Sewage has been stepping up efforts to tackle water sewage pollution after releasing a report that revealed that across the UK, nearly 3,000 discharge events occurred from Combined Sewage Outfalls (CSOs).