Surface Water: Our essential guide to surface water and the impact of algae

Our essential guide to algae and surface water - looking at what it is, what causes it and how to prevent it building up in our drinking water ecosystems.

How do you define surface water?

Surface water, according to the National Geographic encyclopedic entry is: "Any body of water above ground, including streams, rivers, lakes, wetlands, reservoirs, and creeks. The ocean, despite being salt water, is also considered surface water."

“Research conducted by the USGS in 2015 revealed that 70 per cent of all water used in the United States came from surface water.”

A key part of the hydrologic cycle, precipitation and water runoff feed surface water bodies. Surface water can lose water through evaporation and seepage of water into the ground - what is known as groundwater. Although surface water and groundwater can also feed into one and other. 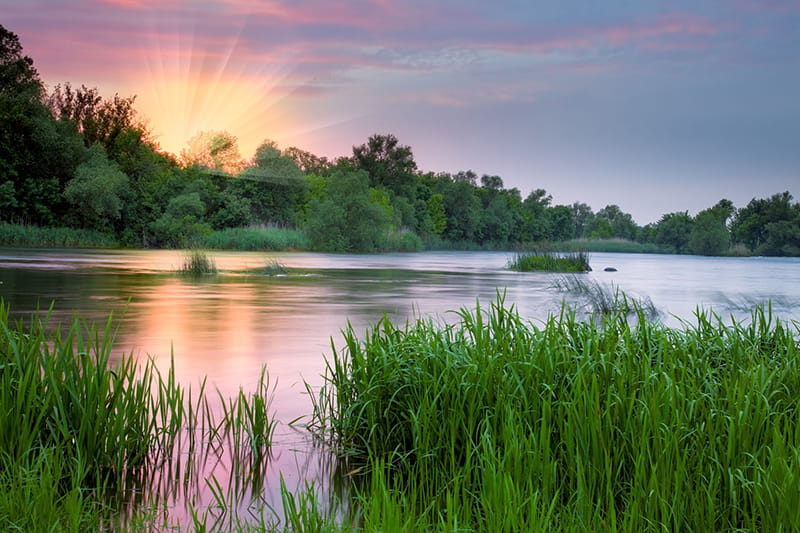 There are three types of surface water:

Surface water is our most easily accessible water, far more so than groundwater. As our main source of drinking water, it also plays a vital role in the irrigation. Research conducted by the USGS in 2015 revealed that 70 per cent of all water used in the United States came from surface water. 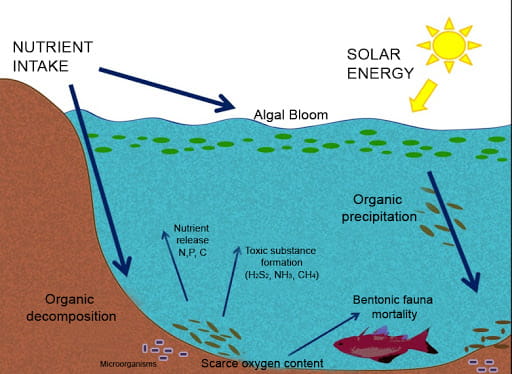 Nature defines eutrophication as being "characterized by excessive plant and algal growth due to the increased availability of one or more limiting growth factors needed for photosynthesis, such as sunlight, carbon dioxide, and nutrient fertilizers."

Eutrophication takes place naturally over centuries as lakes and rivers age they become filled with debris. However, increased agricultural and industrial human activity has accelerated this natural phenomenon through both point-source discharges and non-point loadings of limiting nutrients, such as nitrogen and phosphorus. 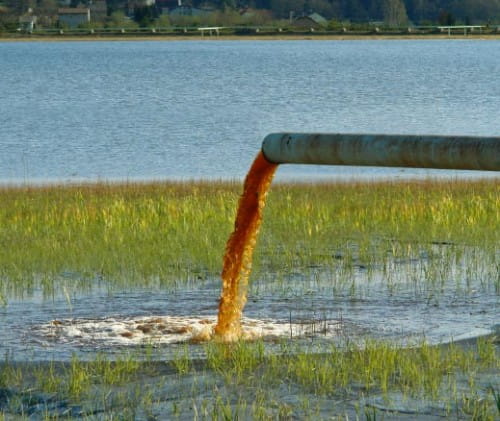 What nutrients are in water?

Water is comprised of hydrogen and oxygen, and naturally calorie-free. Surface water can sometimes contain traces of minerals like calcium, magnesium, sodium, zinc, and copper.

What does cyanobacteria mean? 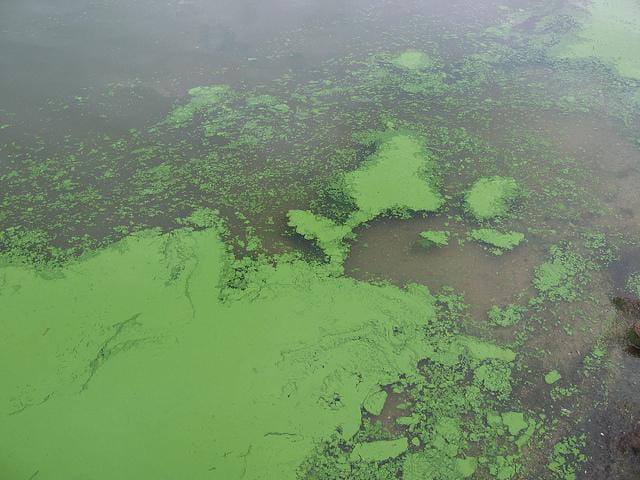 Cyanobacteria is a type of algae that lives in water whose microorganisms are capable of performing photosynthesis. They are commonly referred to as 'blue-green' algae.

Because they are bacteria, they are quite small and usually unicellular, though they often grow in colonies that are large enough for us to see.

They have the distinction of being the oldest known fossils, as they are more than 3.5 billion years old.

Where are cyanobacteria found?

Cyanobacteria can be found naturally in all types of water, according to the CDC. The single-celled organisms live in fresh, brackish (combined fresh and saltwater), and marine water.

One of the most common types of algae, cyanobacteria do not require anything other than sunlight to grow, making most open surface water bodies perfect habitats for it to grow. 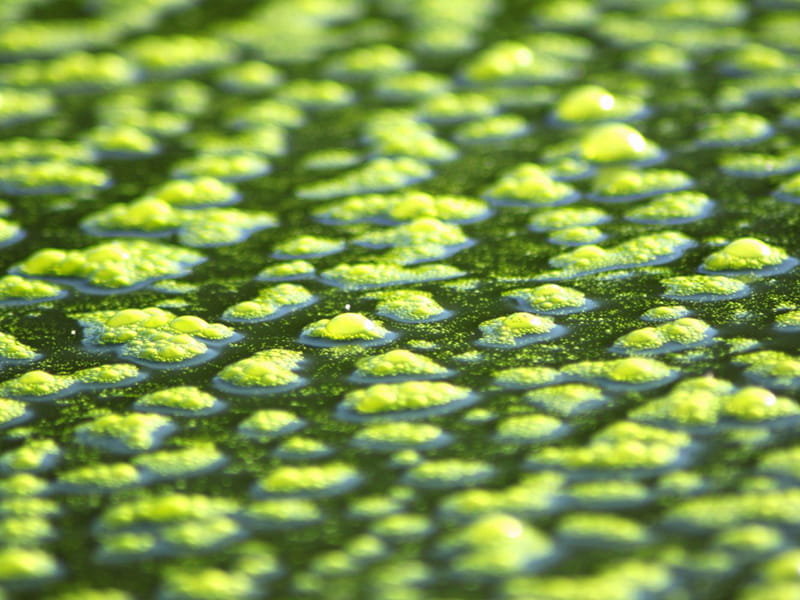 Algae, in its simplest terms, can be defined as a group of aquatic organisms that are able to perform photosynthesis, Live Science.

Most people are aware of the most common types of algae; for example seaweed, pond scum and even algal blooms that grow in lakes. Yet, there is a lot more to know and understand about algae than what we clean out of our garden ponds.

Where are algae found?

Algae can be found in almost any freshwater or saltwater body. As most algae requires sunlight to grow, surface makes an ideal environment for algae to bloom.

The title, "Algae", can cover a variety of organisms that are capable of producing oxygen through sunlight - but these organisms are not that closely related.

There are, however, certain key characteristics that unite them while distinguishing them from plants found on dry land.

“Able to grow in a wide range of aquatic habitats, algae can flourish in freshwater lakes and saltwater oceans.”

According to Laura Barsanti & Paolo Gualtieri, the authors of Algae: Anatomy, Biochemistry, and Biotechnology, algae are not highly differentiated in the way plants are. They lack true roots, stems and leaves, while also lacking a vascular system to distribute water and nutrients around its body.

Algae can exist as a single, microscopic cell or as macroscopic and multicellular. They can live in colonies and even take on a leafy appearance - as can be seen in seaweeds and giant kelp.

Able to grow in a wide range of aquatic habitats, algae can flourish in freshwater lakes and saltwater oceans. Algae is also very resistant, as they are able to withstand and thrive in a range of temperatures, varying concentrations of oxygen and carbon dioxide, acidity and turbidity.

A majority of algae are autotrophs or photoautotrophs, meaning they gain nutrients from sunlight through photosynthesis. There are some algae however that require nutrients from other sources - they are heterotrophic algae. Meaning they need to absorb organic materials to grow, such as carbohydrates, proteins and fats.

Algae is able to reproduce through asexual or vegetative methods of sexual reproduction. The asexual methods involve the algae producing motile spores, while the vegetative method is simple mitosis cell division that produces an identical offspring.

There are seven major types of Algae, that each features distinct sizes, colours and functions:

What does algal bloom mean? 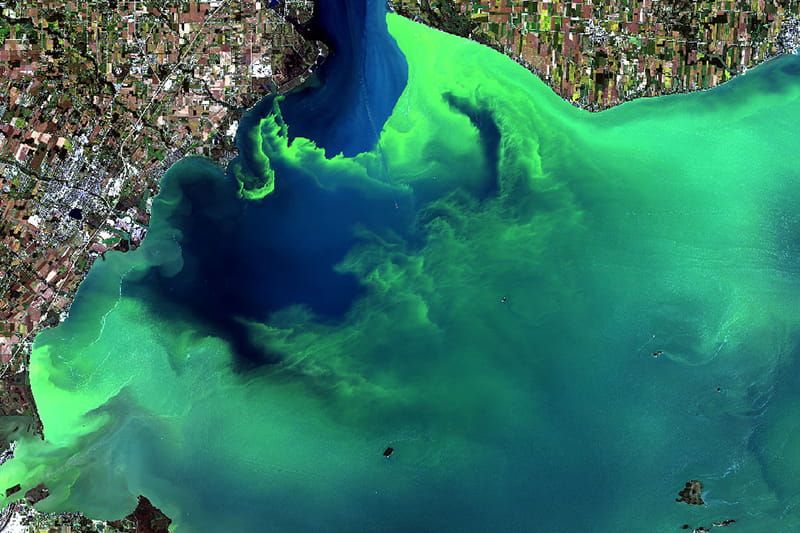 Algal blooms, or HABS, refer to the uncontrolled growth of certain microalgae, which leads to the production of toxins, disruption of the ecosystems and increases the costs of water treatments, according to the Environmental Protection Agency (EPA).

Why is algae bad?

Algae isn’t necessarily bad but it can have harmful effects on its environment and the animals living in them. As an algal bloom colony grows they release toxins that can kill fish, small mammals, birds and, if ingested by humans, can cause severe illness or even death.

Other algae are non-toxic, but instead are harmful as they eat all the oxygen in water as they decay, clog fish gills and smother coral and submerged aquatic vegetation.

In freshwaters, cyanobacteria (blue-green algae) are the main toxin producers, though some eukaryotic algae also cause problems. Algae use the toxins to protect themselves from being eaten by small animals.

The phenomenon is known as eutrophication or nutrient pollution- when there is an excess amount of nitrogen and phosphorous added to the ecosystem. The fertilizers that we use in agriculture and animal manures are rich in nitrogen and improperly treated wastewater is high in both nitrogen and phosphorus, according to the EPA.

What causes algae and how is it formed? 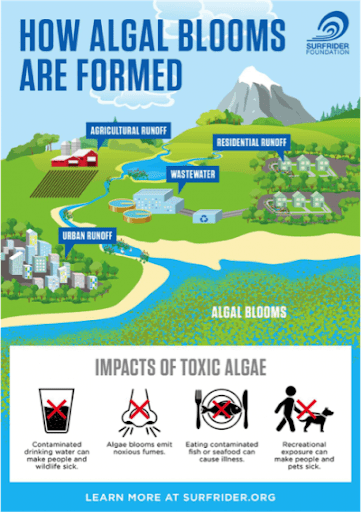 Algae and algal blooms are formed as a result of several factors including; available nutrients, temperature, light, ecosystem, disturbance, hydrology and the chemistry of the water. It is a combination of these factors that cause algae to form:

“Algae requires carbon dioxide and sunlight to grow but it also needs nutrients to grow in the form of nitrogen and phosphorus.”

How long does it take for algae to grow? 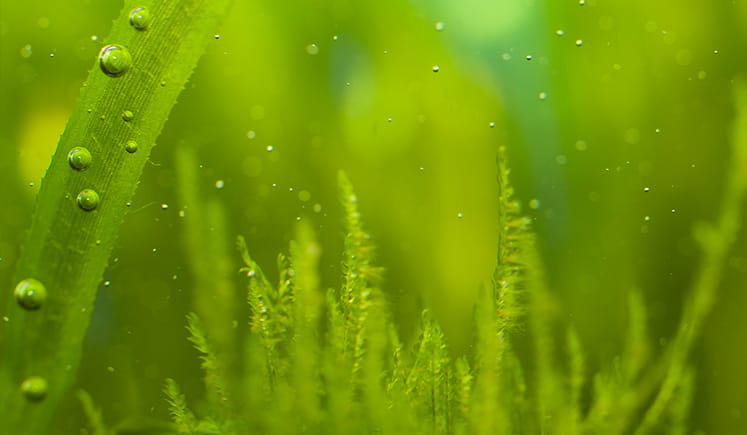 The time it takes blue-green algae varies depending on the conditions it is in. However, due to its ability to gain nutrients from sunlight, this type of algae grows quickly, creating blooms that will spread across the surface of the water.

What nutrients does algae need to grow?

Algae requires carbon dioxide and sunlight to grow, but it also needs nutrients to grow in the form of nitrogen and phosphorus being the most important ones.

These nutrients can be sources from agricultural fertiliser, waster water and pollutants entering the surface water. The combination of these key nutrients and sunlight causes the algae that is capable of photosynthesis to produce chlorophyll.

Impact of algae on surface water?

The impact of algae on surface water can have a number of effects, both positive and negative, on the ecosystem and quality of drinking water that can sourced from that body of water. There a thousands of different types of algae that each effect surface water in a different way.

From algae that helps create oxygen to algae that releases harmful toxins – algae and its impact on surface water is fast becoming a water issues that need addressing.

Algae can have both useful and harmful effects on surface water bodies. In some instances, algae, as well as the cyanobacteria, are capable of causing various nuisance effects in surface water, such as excessive accumulations of foams, scums, and discolouration of the water, the Water Encyclopaedia.

When the numbers of algae in a lake or a river increase explosively, it results in an algal bloom. An algal bloom contributes to the natural ageing process of a lake, and in some lakes can provide important benefits by boosting primary productivity.

Algae can have useful influences on the surface water environment - with some algae producing oxygen, food for fish, oils and other useful materials, according to Live Science.

“Toxic blooms pose the biggest threat to not only to fish and other living organisms but also to land animals and humans.”

However recurrent or severe blooms can cause dissolved oxygen depletion as the large numbers of dead algae start to decay. In highly eutrophic lakes, algal blooms may lead to anoxia which leads to the death of the fish in that ecosystem, especially during the summer.

In terms of human values, the odours and unattractive appearance of algal blooms can detract from the recreational value of reservoirs, lakes, and streams. Repeated blooms may cause property values of lakeside or riverside tracts to decline.

Toxic blooms pose the biggest threat as not only can they affect fish and other living organisms in the surface water ecosystem, but they also pose a threat to land animals and humans.

Blooms of toxic species of algae and cyanobacteria can flood surface water environments with the biotoxin they produce. When toxic, blooms can cause human illnesses such as gastroenteritis and lung irritations.

Other cyanobacterial toxins are less drastic and only cause skin irritation to people who swim through an algal bloom. Toxicity can sometimes cause severe illness and death to animals that consume the biotoxin-containing water.

How to get rid of algae?

How to get rid of blue-green algae in lakes 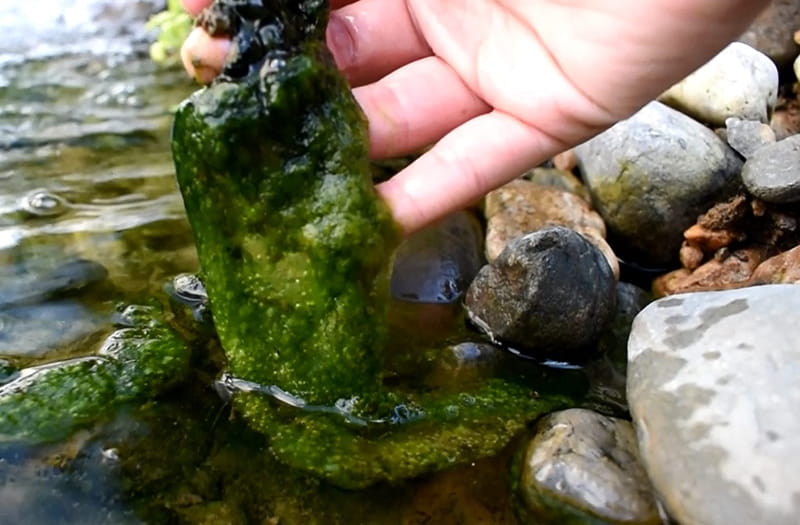 Successfully removing blue-green algae can be difficult but can be achieved in a number of ways.

The most common way to remove blue-green algae is to simply clean the surface layer of algae with a net. However, this is a very demanding way to rid a lake of algae.

Several products are entering the market such as filters than can help to remove large amounts of blue-green algae. One of the easier ways to remove algae is to starve the cyanobacteria - which is done by carefully controlling the nutrients entering the surface water ecosystem.

Once you are controlling the nutrients entering the surface water you can remove the large blooms of algae to ensure that the blue-green algae reduce the rate of its growth.

How to prevent algae blooms in lakes

There are several ways to prevent the build-up and growth of Algae blooms: